THE TOWER OF BABEL SYNDROME

In the usual clinical encounters between a health professional and a suicidal patient the clinician interviews the patient in the search for clinical risk factors, particularly for signs of a psychiatric disorder, such as depression, substance abuse, severe personality disorder or schizophrenia. The patient however, is caught in an internal struggle with an unbearable self, unbearable mental pain, extreme hopelessness, and self-hate. The suicidal patient does not feel that suicide plans need medical treatment (1).
Thus, the patients’ concepts of suicide and the concepts of professional helpers, do not match, i.e., patients and doctors speak different languages. The Tower of Babel Syndrome.
Suicide is not a symptom of psychiatric disorder, but an action. Most health professionals have not learned how to understand peoples’ actions. Even in a severe depression, it is not the disorder itself, which initiates the suicidal act, but the individual, the "owner" of the depression.

Building a strong therapeutic alliance with the individual patient remains an art, at the core of which are empathy, attachment, listening ability, openness and respect for others.
We make sense of the actions of others' through a person's narrative related to the action. Narratives represent a series of events, and meaning is accomplished interactionally, between teller and listener. A narrative interview is the basis of a patient-oriented and collaborative understanding of the patient’s existential crisis.
A study analysing interviews with suicide attempters found that a narrative approach aimed at understanding the patient's suicidality in the context of emotional life career issues was associated with a stronger working alliance (2).
To allow patients to develop their self-narratives, the interviewer must respect the patient as the expert of his or her own actions. This is in fundamental contrast to the clinician’s role in the psychiatric assessment of the patient’s mental state, where the therapist is the expert. “The narrative interview with the suicidal patient” (3)

In the year 2000 an international group of dedicated clinicians and researchers convened in a Swiss mountain village to discuss models of patient-centered therapies for suicidal individuals (Aeschi Working Group). The so-called Aeschi Conferences developed into regular biennial meetings focused on therapist-patient interaction and treatment engagement. “Discovering the truth in attempted suicide” (4)
A multi-author volume published in 2011 summarized the content of 10 years Aeschi Conferences. “Building a Therapeutic Alliance with the Suicidal Patient” (5) „The Aeschi Working Group: Guidelines for Clinicians” (PDF) 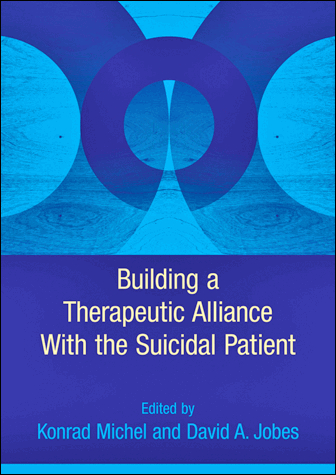 “This book, written by clinicians for clinicians, fills that void by helping the reader to understand the complex process of joining with the suicidal individual in the collaborative pursuit of healing. This book deserves a place among the key books in the library of every clinician working with patients at risk for suicide."
(Thomas E. Ellis, PsyD, ABPP, Professor, Menninger Department of Psychiatry and Behavioral Sciences, Baylor College of Medicine, Director of Psychology, The Menninger Clinic)

"… if we want to affect the behaviors and beliefs of the person in front of us, we need to first understand what goes on inside their head and go along with how their brain works."

(The Influential Mind: What the Brain Reveals About Our Power to Change Others, Tali Sharot, 2017, p.7)

"What if this is what we should be doing? What if it’s that simple?"
(The Best Way To Save People From Suicide by Jason Cherkis, Huffpost)
© ASSIP.CH 2021